Home » Blog » Is An Interactive Digital Donor Wall Right For Your Organization? 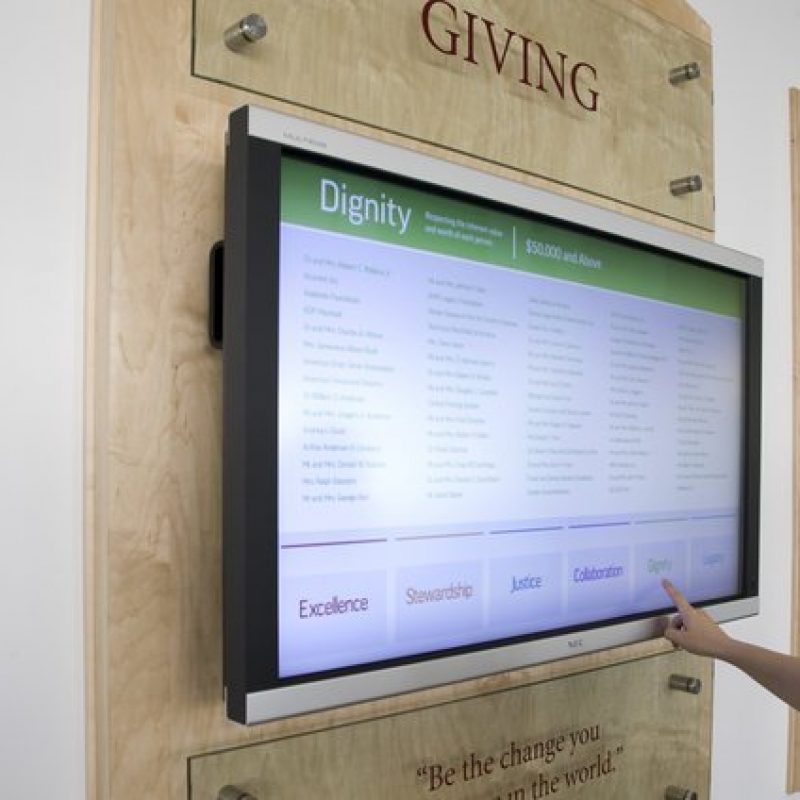 Is An Interactive Digital Donor Wall Right For Your Organization?

Based on your past experiences you may feel that a traditional donor wall is expensive, cumbersome, challenging and time consuming to update and costly to clean and maintain. In fact, a large donor wall program can be a full time job for one of your staff for a couple months every year. If the donor wall hasn’t been well planned, you could run out of room after a couple of rounds of updates, or updating could become prohibitively expensive. At DonorSigns.com we design recognition programs to avoid these pitfalls, but is there a better way?

The ideal donor wall would be a digital solution that could be updated daily by your staff in just few minutes without leaving their desk. Donors could be found with a quick search, far more information can be displayed about the donor, and you could provide information about your organization and on-going campaigns.

Digital donor recognition seems like an ideal solution for every overworked, harried development professional. But is it going to satisfy your donors needs?

Interactive donor walls create an engaging multi sensory experience that includes visual and sound. Visitors see more than just a name, they see and hear a story and see a face. From a donors perspective it is important to understand that a digital donor wall does not show a donors name on a permanent basis that can be seen by every one that walks by, especially their friends and neighbors. There is a big difference between a donor seeing his or her name etched on a plaque compared to their name in a computer data base that only appears sporadically or when someone does a search for their name. Realistically, who is going to do a search unless it’s someone who already knows the donor is in the system.

So, how do we bring together these two divergent points of view and create the best possible scenario for everyone?

At DonorSigns.com we found the best solution is to incorporate digital donor wall monitor(s) into a traditional physical donor wall. Let’s say you have five giving categories and the bottom two categories have about a thousand names each. These two categories are going to cause the most time and expense to update and maintain so why not display those two groups on a monitor. If they each had their own monitor it would be possible to program the system to scroll the names, assuring that each name would appear at specific time intervals, and would stay on the screen for a specified amount of time.  This solution would not need to be interactive and could be achieved for a fairly reasonable cost.

In addition, a third searchable touchscreen interactive monitor could be installed that would provide more detailed information about the larger level donors, (stories, photos and videos). These donors would be represented permanently on the physical donor wall and in a digital system. Another option is to have a large enough screen presence to display all donor names all the time. This is usually accomplished by stacking multiple screens side-by-side to create a large wall of monitors. The monitors are all integrated to interact with each and perform as a single unit. One of the monitors can be a searchable touchscreen monitor to allow visitors to call up specific information about the donors they see on the screens. With this scenario all donors are visible all the time.

How do you get started on a recognition project that includes a digital solution? At DonorSigns.com we have been providing planning, design and fabrication of traditional donor recognition for over 25 years. We work with a national leading IT/ Tech company that has a high level of expertise in programming, user experience design (aka USD), hardware development, training, and 24/7 service. Together our focus is providing a turnkey solution that utilizes the best of digital and real-world physical recognition. We plan systems that are engaging, easy to use, meaningful, and appreciated by donors, visitors, and development professionals.

Heres a link to the full article we wrote on ADRP, The Hub: https://ADRP.memberclicks.net/digital-donor-walls